Soyez mysterieuse in the Black Forest

Thomas Rees is a middle aged jeans type, with greying hair at the sides, thin-lipped, blue eyed, married, two children and is a sculptor who likes to depict the powers that be in religion, fantasy and mythology. He has an individual view of sacral stories and objects.

The birth of Jesus is depicted this time in his 6m work of art, and also associated with the murder of the children of Bethlehem, and posed with King Herodes with a crown, the symbol of power on earth.

He begins with Adam and Eva at the top, a dragon head to signify a snake, the inferno, the castle of Herodes with a knife, Roman legionaires with lances, angels, the brothers Cain and Abel and the ten commandments. 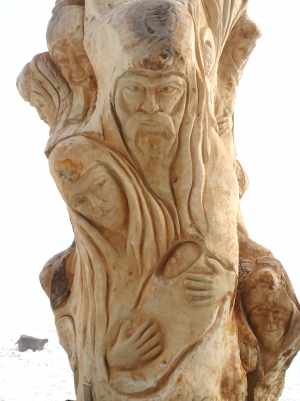 The open grave in Easter signifies Christian hope, and as the reason for Christian existence is a cross, symbolising a certain Friday (Karfreitag). One figure is shown screaming and the other shows sadness and is sunk in itself. Wonderful, sensitive wooden emotive art: biblical history carved in wood. But wood is Nature and given to withering and change through the negative onslaught of the scorching sun, wet and damp rain, wind, frost, snow and ice.

When you go past the other wooden sculptures of Thomas near his home in Freiburg-Kappel figures you can discern the changes wrought by the four seasons. But it is this change that makes his wooden figures all the more fascinating. What a magical, fascinating place to live in, with all those magnificent works of art from history, mythology, pre-history, from far-off countries, and Thomas´ fantasy which never ceases to conjour new faces, figures and creatures. Need inspiration for your next fantasy novel? Just drop in at Freiburg-Kappel and you´ll certainly be flabbergasted if not astounded. In a winter-garden structure in his house is a figure with two lovers in ecstatic embrace which I find pure, fascinating with a hunk of eros, a symbol of what love can be in its sensual, romantic form. You can discover influences of the South Sea figures akin to Paul Gauguin, different styles, even a Givenchy bridge near his home, where a rivulet flows down to the maize and potato fields. Figures of forgotten Gods, strong, elegant women. Thomas combines in his sculpture lot of legends and motifs which remind you of the polytheistic character of old religions from the South Sea, monumental Germanic mythological figures or his studies of the female figures, lying prostrate on the ground, standing erect, hands at the sides and head turned to the side. The variations are endless. ´Love each other and you´ll be happy´ is also his message to fellow humans, and his art has a certain ambiguity: there´s the good and the bad, positive and negative, happiness and sorrow, small and big, monumental at times, sinking or emerging figures., exotic fantasy worlds. Didn´t Gauguin insist on ´soyez mysterieuse´? Be mysterious. That´s the feeling you have when you look at his creations. 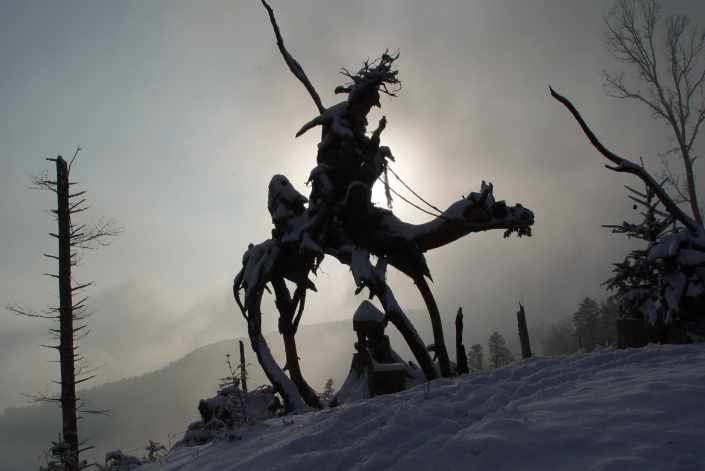 Thomas sees not only the beautiful world of religion but he points to, and emphasises, also the not-so-holy world: the banishment from Paradise, the building of the Tower of Babylon, murder of the brother, the flood and Noah´s Arch. He asks his fellow humans and theologists: why? He poses this question not only to Homo religiosus but also people who are in search of religion and rituals. You only have to open your eyes, interpret what they reveal and decide yourself in which direction you want to go. Perhaps all religions lead to the same goal: humans should be humans.

Thomas Rees is the most productive person in Freiburg-Kappel and his works are impressionism it its purest form, the depiction of sensory feelings, which tend to be transitory under the changing conditions of light, colour, movement and form. Nature plays a big role in his creativeness, for his art objects are mostly displayed outdoors, without the protection allotted to works of art in art-galleries. He, himself, is a well-trained out-door guy, prefers to wear a bomber-jacket, jeans and a checked lumberjack´s shirt, a soft-spoken person wouldn´t notice in a crowd but endowed with an explosive creativity. What a fantastic neighbour I have. Do pay Kappel a visit: ask anyone and they´ll tell you where the sculptor lives